If you have not already read the other transcribed portions of Lewis Anderson’s Revolutionary War pension file, you may find them here: Part I, Part II, Part III, Part IV. 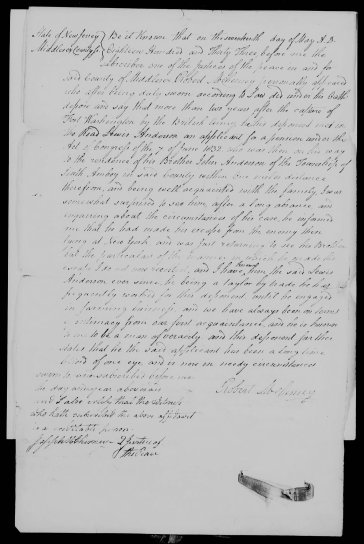 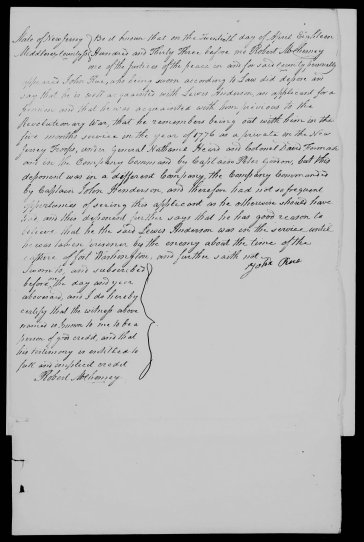 Witness Testimony of Robert McChesney, Justice of the Peace

State of New Jersey, Middlesex County | Be it known that on the seventeenth day of May A. D. Eighteen Hundred and Thirty Three, before me the subscriber one of the Justices of the Peace in and for said county of Middlesex, Robert MChesney personally appeared who after being duly sworn according to the law did under his oath depose and say that more than two years after the capture of Fort Washington by the British Army he the deposed met in the Road Lewis Anderson an applicant for a pension under the Act of Congress of the 7 of June 1832 who was then on his way to the residence of his Brother John Anderson of the Township of South Amboy in said County within one miles distance therefrom, and being well acquainted with the family, I was somewhat surprised to see him, after a long absence, and enquiring about the circumstances of his care, he informed me that he had made his escape from the enemy then lying at New York and was just returning to see his Brother but the particulars of the manner in which he made his escape I do not now recollect, and I have known him the said Lewis Anderson ever since, he being a taylor by trade he has frequently worked for the deposed until he engaged in farming business and we have always been on terms of intimacy from our first acquaintance and he is known to me to be a man of veracity and this deposed further states that the said applicant has been a long time blind of one eye and is now in needy circumstances

Sworn to and subscribed before me the day and year above said and I also certify that the witness who hath subscribed the above affidavit is a credible person. | Robert MChesney

Joseph McChesney Justice of the Peace

State of New Jersey Middlesex County | Be it known that on the twentieth day of April Eighteen Hundred and Thirty Three before me Robert McChesney one of the justices of the peace in and for said county personally appeared John Rue, who being sworn according to the law did depose and say that he is well acquainted with Lewis Anderson, an applicant for a pension and that he was acquainted with him previous to the Revolutionary War, that he remembers being out with him in the five months service in the year of 1776 as a private in the New Jersey troops under General Nathaniel Heard and Colonel David Foreman and in the Company Commanded by Captain Peter Gordon but this deponent was in a different company, the company commanded by Captain John Henderson, and therefore had not so frequent opportunities of seeing this applicant on he otherwise should have had and this deponent further says that he has a good reason to believe that the said Lewis Anderson was in the service until he was taken prisoner by the enemy about the time of the capture of Fort Washington and further saith not.

Sworn to and subscribed before me the day and year above said and I do hereby certify that the witness above named is known to me to be a person of good credit and that his testimony is entitled to full and implicit credit.