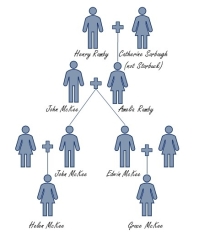 This letter to my great-grandmother, Grace McKee (1887-1964), was tucked inside a notebook with several other letters. Although it is not dated, has no envelope, and is not signed with a full name, I believe it must be from her first cousin, Helen McKee (1890-1958). It could have been written in the 1940s or early 1950s, but that’s just a guess.

The letter describes Grace and Helen’s grandmother and great-grandparents, my 3rd and 4th great grandparents. I’m curious to know what prompted Helen to write this letter, as I believe she and Grace both lived only two or three miles from each other for all but one year of their lives. Regardless, I’m glad it was written down so all the bits of information are not lost!

I can empathize with Helen’s regret in the letter that she didn’t record more of her family’s history and stories while she had the chance. It was partially my failure to ask questions when I had the chance that compelled me to reconstruct stories through genealogy. I am certainly as sorry as Helen that the family recipes have been lost as well, what a wonderful heirloom that would have been!

I will tell you what little I know. I am the only one of our children who would know anything about our “clan” which is due to me being at home more than they. Many times I have been sorry that no one took advantage of the opportunity we had while grandmother lived to ask her all we wanted to know as I know she would have been very willing to give us all the details, she would mention things occasionally but I think in those years all of us were so intent on making a living that our thoughts were running in other channels and we lost the chance to record our ancestry.

Grandmother was born in Hanover Penn., February 27th, 1827. I don’t know whether they ever lived other places in Penn. but she spoke of Hanover her birthplace. While she was a girl her family moved to Bloomington, Ill. They traveled in a covered wagon and she remembered that the horses would “snort” because they would scent wild animals and her father would get out and walk beside the horses carrying the gun, later they came to Dayton, O.

Our great grandfather was “Henry Ramby” and our great grandmother was “Catherine Starbuck.” Mother said she was the most thrifty and energetic person and had acquired several pieces of property in spite of grandfather Ramby’s bad health due to asthma. He had studied to be a Doctor but I guess his ambitions were frustrated because of his health and they tell me grandmother was a firm believer in education and she was most insistent that the children be most particular whom and what type person they would choose to marry. I don’t know if she was ever disappointed or not.

I am so sorry that no one ever kept some of their recipes so that their descendants could still enjoy what they did.

Well I told you all I know which may not be much and I only wish I did know more, however if you go and perchance should come across any fine, wealthy people do tell them we are their relatives.

From your favorite cousin

P.S. I hope you have a fine trip and would like to hear all about it. bye; bye.

2 thoughts on “Notes About the Ramby Family”