Tomorrow is Armistice Day, and not just any Armistice Day, but the 100th anniversary of the end of WWI. Although I have no direct ancestors who participated in the conflict, my great-grandmother’s brother, Omer Hartzell, fought in the marines in WWI. He was discharged as a corporal in the 96th company of the 6th regiment of the Marine Corps. The regiment is known for their participation in the famous Battle of Belleau Woods in June 1918. As a result of their participation in the battle, the 6th regiment still wears the French fourragère on their uniform to signify that the regiment was awarded the croix de guerre.

The following is a transcription of an article published in the Dayton Herald July 20, 1918. In the story Omer is speaking of Belleau Woods, based on the timeline of his unit and the dates he was admitted to the hospital, I think he is specifically speaking of the recapture of Boursesches, although it’s hard to tell.

This website gives the best timeline of the battle that I’ve been able to find, if you want to better follow along: http://www.worldwar1.com/dbc/ct_bw.htm

From His Cot in Hospital, Omer Hartzell “Sees” an “Uneasy Bunch” in Berlin as Americans Prepare for Struggle.

The capture of the first important town by American forces in France, and that by only 50 marines, is graphically described by Omer Hartzell, one of the number, in a letter to his parents, Mr. and Mrs. Milton Hartzell, of Franklin.

Mustard gas sent Hartzell to a hospital bed and from there he writes of the way in which the boche “likes” the Yankee lads. His letter follows:

Since writing you last things have been moving very fast, in fact too fast. Shortly after my last letter was written the word that we would “shoveoff” in two days was passed. Two hours after we received this word orders came to “roll packs and stand by to shove off immediately.” In a short time we were under way in motor trucks toward an entirely different front from where we were originally destined to go.

After a ride of some hours we were once more up on the line, where most anything is liable to happen. It was somewhat different from what we had been up against before. There were no trenches, battery after battery was out in the open and everything was conducted as it would be before trenches grew popular. All very picturesque, but most uncomfortable as you could readily appreciate if you ever heard the whine and crash of the big ones and the zip of the little ones when there is no cover.

We did not have to wait many hours until we saw Fritz coming over an open field quite a distance away. You need not ask whether he received a warm reception. The result was that he immediately retired to the shelter of a convenient woods and after retired a great deal farther.

During my entire stay and I was fortunate enough to stick until the worst was over, it was fight from midnight to midnight with Fritz getting his every turn. You probably have read of the capture of an important town by the marines. It chanced that I was one of those who got there safe and sound. In all I think there were about 50 marines who got there safely. Ever since I have been wondering how it was accomplished The attack was made in broad day. We had to cross an open field for about 700 or 800 yards with a whole nest of machine guns on our left flank, to say nothing of the direct fire from the village and indirect fire from the lines behind. When we started down the hill it had the appearance of the beginning of a hard shower after a long dry spell. However, we moved too fast for him and were in the town before the artillery could open up. There was a whole machine gun battalion in the town, but they were so taken by surprise that as soon as we closed in they beat it, leaving us all kinds of equipment but very few prisoners. We held that town which probably had a population of 4,000 or 5,000, for six hours with only 50 men, until re-enforcements arrived.

On several occasions they have made strenuous efforts to retake it, but without success. Of course, in the meantime they keep shelling it continually. Our casualties were pretty heavy, both in taking the town and holding it, but I believe we sniped off more Germans while we were in town than we lost. Their lines at some points were only 100 or 200 yards away. This is not counting what they lost from artillery and counter-attacks.

During our entire stay it was one close shave after another. However, I escaped without a scratch until the last night, when they rained shells of all shapes on us for 4 1/2 hours, about every third one being mustard gas. During my brief career over here I have had some experiences with shells and gas but this one had them all backed off the map. During that night I would have taken all bets at 100 to 1 that 1 that I would attain my rating as a first-class fireman in hell at any moment, but when dawn broke I was still all together. After running through a light barrage I was able to make the upland and a few cigarettes put me in good shape–so I thought.

Two of us had saved an automatic and we took up a position in the front line along with another company. Talk about a warm place! This had a little shade on all of them as the Germans and U.S. marines were in the same woods. The air was alive with machine gun bullets, trench mortars were running full blast and just to show us something different they tried dropping big bombs from planes on us. For a position where there was no movement going on I don’t believe they ever came any warmer than this. It was almost impossible to get the wounded out, let alone taking care of the others.

I was making good with a vengeance for what they did to us the night before when they started dropping high explosive shells on us. There is quite a strong gas from this explosive and they finally had to take me out. So here I am in the hospital with a few burns and a little touch of the gas on my lungs. Some fine place it is here with clean beds and plenty to eat, which are things a soldier of the line does not get, especially in a campaign like we just went through. There is nothing serious about my condition and I will probably be back in the line in a very short time.

You no doubt appreciate that the foregoing is rather a rambling and disconnected tale, with the most interesting parts omitted. Possibly I may get to tell the whole thing some day.

While I am not at all anxious to talk about it, I might say I was able to get quite a few Germans; enough for myself and some of the others who cannot come over here. In a way I feel very well satisfied now and if they get me on the next trip you can tell them at home that I made good before they finally got me. At the same time I would like to bet a few francs that they will not be able to get me, even though the odds are shorter.

Everything is going as it should and as the Germans have had a real taste of what the American army is going to be like, I feel there must be a very uneasy bunch in Berlin. 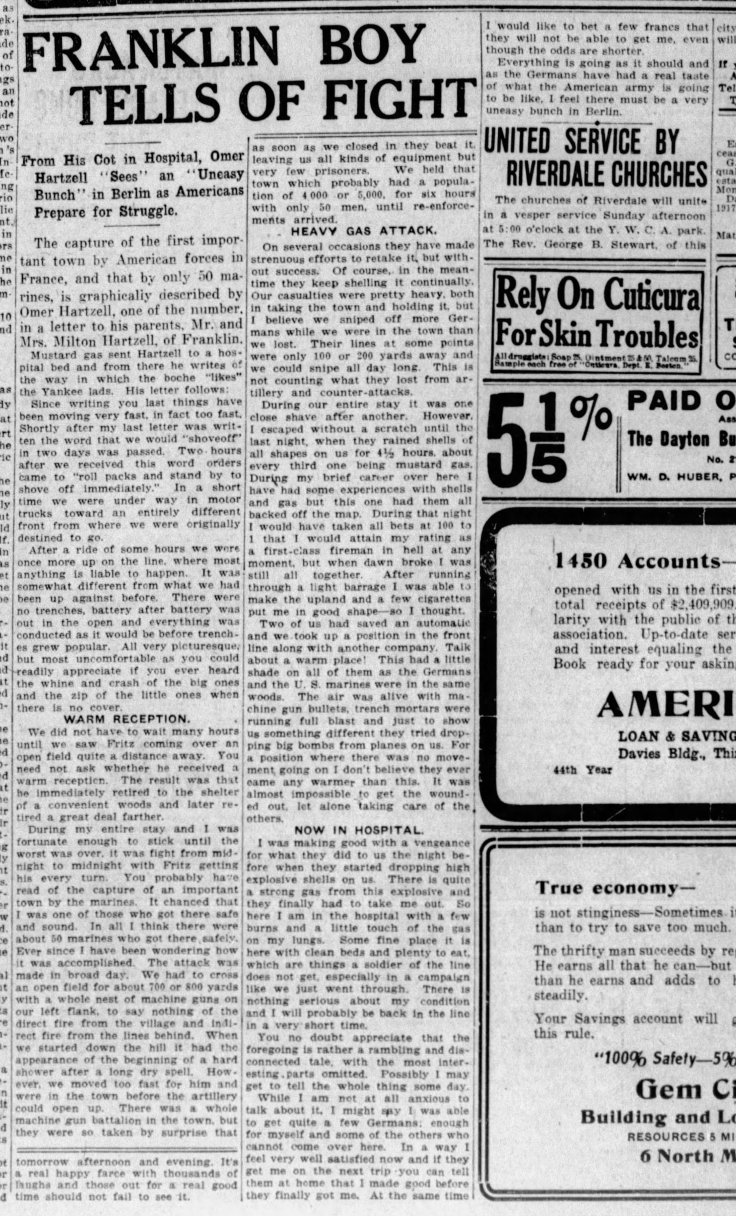