Okay so I have been putting off this final post, I know its waaaay overdue but I have excuses! First, I didn’t even get to leave France on time. I was delayed by weather on both sides of the Atlantic. Here is an excerpt from a draft I started writing while I was stranded:

“So I thought I was leaving France yesterday, but turns out that was not the case.

I got my flight out of Nantes just fine, it was an hour late but I passed the time talking to an adorable little French boy who was traveling unaccompanied. He was just learning to read so I was helping him pronounce words from his Scooby Doo comic book like “asperge” and I had to define “anomaly” for him. There was even a crossword titled “Halloween” with a picture of Scooby Doo in a pilgrim’s hat carrying a turkey and a long list of food words to search for. Try explaining that to a French 6 year old.

In addition to the massive east coast storms, Paris itself was also below freezing and snowing. So my flight got canceled from Paris to Philadelphia. I already had a 16 hour layover so I had reserved a hotel room. The next morning I squeezed in the airport shuttle with the 100 other passengers trying to get to the airport then stood in line at the US Airways desk for an hour.

In the meantime the French-speaking girl behind me was crying hysterically and having a hard time on the phone with the US Airways rep and she noticed I spoke French so she hands me her phone to translate. It was interesting…”

So anyway. I finally made it up to the desk and was told that there were no flights until 1pm Christmas day!!! I didn’t know what to do, I couldn’t be stuck in Paris for five more days and miss Christmas! I accepted the seat anyway then called my dad. While I was standing in line I noticed a girl from IES in a nearby line for another airline. We met up afterwards and found out we were both stuck. I told her to come to my hotel with me so she didn’t have to sleep in the airport with all her luggage (luggage is a whole different story). So we spent the night at my hotel and she left the next morning to try her luck at the airport and meet her host brother who was staying in Paris and stay with him.

Luckily I have a great dad who spent a few hours on the phone with the airline and got me a flight out of London on Christmas Eve. The only problem was I had to get to London and the Chunnel was closed for technical problems (earlier that week 4-5 trains had been stuck in the Chunnel for 12 hours and thousands of passengers were stranded on both sides of the tunnel). We managed to find a flight the night before, but not to the right London airport. I still had to take the shuttle between airports. But no big deal. So I hibernated in my hotel room one day and the next day I took the RER into Paris. I went to the Eiffel Tower, a Christmas market and Berthillon, where I had the best salted caramel ice cream on the planet. I finally ventured to the only restaurant in sight for dinner.

Finally on the 24th I checked out of my hotel and headed to the airport where I hung out all day, considering my flight wasn’t until 9pm. I wandered around for a while doing just about everything I could think of in an airport. I finally bought a book in English, The Other Boleyn Girl by Philippa Gregory. At 9 I got on my flight, which was nearly empty and had a very pleasant flight to London Heathrow. Then I bought a shuttle ticket and waited with a very interesting crowd of people for about an hour and a half for the shuttle (talk about bonding with strangers) to London Gatwick Airport. Once there I realized I was spending the night in the airport. Unfortunately there was no seating before security so I spent a few hours wandering around being miserable. I tried to go get a hotel room but it was about 3:30am by that point and there was a huge crowd of people trying to get rooms due to a canceled flight. I was just too tired to deal with it so I sat down on a couch in the hotel lobby, wrapped myself in my coat and scarf (the automatic doors were broken to the parking garage air was blowing in) and read my book until the adjacent cafe opened at 5am. (I had no way to tell time since my phone battery was nearly dead and off.) I got some breakfast and kept my seat until my flight started check-in at 7:30.

I used the rest of my pounds to buy a magazine and about $25 worth of candy bars for my family. Then I parked myself on a bench and waited for the gate announcement. The flight itself was uneventful, I watched a few movies and had a few meals. I never managed to sleep even though I’d been up since the previous morning. Upon landing in Charlotte I passed security and got on my plane to Dayton. I went home with my family and had Donato’s pizza. Mmm. And after a 38+ hour day I finally went to sleep. 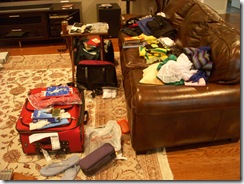 Oh, luggage. So when I found out my flight was canceled I went to collect my luggage from US Airways. Turns out they didn’t have it. It was actually not checked all the way through. I was supposed to pick it up in Paris. Opps. So I went to Air France and gave them my claim checks. They didn’t have it. It didn’t get scanned in in Paris. Great. So I filled out a claim form and they wished me luck. Yeah right. I checked my online dossier every few hours. Nothing. When I got to the airport on the 24th I went back to the desk and told them I was leaving. They still didn’t have it so they updated the dossier with my itinerary and contact info. I went home without my luggage. For days after arriving home I didn’t have it. I kept putting off the contents claim form (so they can send you money) and finally I checked my dossier one day. The status was changed to “delivery in progress”!!! My small suitcase showed up at the door around 11pm on…the 30th I think. The large one showed up at the door at 4:30 am (yeah, they called too) on the 31st I think. Or maybe it was all one day later. In any case, I have my stuff now! Yay!

So I’m home. Life is different in the US, much less exciting. I’m cooking a lot which is exciting for me but I’m already afraid I’m losing my French. My family is being really great about me being back. They ask a lot of questions and listen to my stories. I miss my IES friends though. I was able to celebrate my birthday with my friends (although without my sister), check out the awesome cake that we made.

Okay, final word on France (for now): Studying abroad is probably the best semester of college I’ll ever have. I highly recommend you study abroad. If you have any questions about studying abroad please ask them!