Last Wednesday was off for Veteran’s Day, something France celebrates wholeheartedly (they’re always looking for a day off). My host family invited me to go with them to their house in Parce-sur-Sarthe. Parce (pronounced Par-say) is a tiny little medieval town about an hour and fifteen minutes from Nantes. My family has a big old house there, which is apparently a historic landmark. 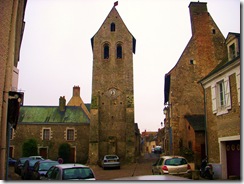 It is the house that belonged to the inventor of the optical telegraph (not that that means a lot, but its pretty and old). The town is absolutely adorable and very quiet. It has a rich medieval history but was burned to the ground during the hundred years war. The bell tower on the left is all that’s left from the original 12th century church. That afternoon we drove about 20 minutes to the train station to pick up their daughter in law and her one year old son.

On the way we passed:

Speaking of decorating for Christmas, Nantes has been at it for weeks. Since they don’t have the same “Thanksgiving barrier” that we do, there’s nothing to stop them from putting up decorations in the beginning of November. Mostly the decorations up so far consist of white frames shaped like waving banners strung with gold sequins. I have to say, between all these tall old buildings they are surprisingly classy.

So, I spent my Wednesday in Parce, which was cool but I had an equally exciting weekend:

Friday I went to an Emmanuel Moire concert. Let me just preface this paragraph by saying Emmanuel Moire is probably my number one favorite French artist ever and seeing him in concert was like having a very realistic two hour long dream (contributing to this feeling is the fact that I have no pictorial evidence because my camera was confiscated). That being said, the concert was AWESOME!!! It was in a relatively small venue compared to the concerts I have been to in the past and even though I got there a little late I still had an awesome view. This was the first concert of the tour for EM’s newest album (L’Equilibre) so he was having a lot of fun with it and interacting a lot with the crowd. The music was awesome and even though I hadn’t heard anything from the new album he threw in some old songs that I new all the words to. The icing on the cake was that he sang Mon Essentiel for us, which is his signature song from the musical he starred in (and which I am obviously obsessed with). Of course when it was over he played an encore song and then after that the crowd coaxed him into playing one more song (it was funny to watch him silently ask permission from the tech people in the back with hilario us facial expressions and gestures). Needless to say, I left that concert extremely happy. 🙂

Of course then I had a lovely trip home which included nearly the entire circuit of night bus H and half the night bus C route (probably an hour’s trip to go what is really three miles).

Saturday I knew homework was in order but I chose to go downtown for lunch, which I ate while walking around the weekly market. Even though the market is just trucks lined up selling food items, it is infinitely fascinating to wander and an excellent place to go when you want a snack…like a beurre sucre crepe (a crepe with butter and sugar).

I am looking forward to a busy week. Tonight I have conversation club (which it appears I haven’t yet mentioned on my blog…), Friday a French Christian band’s concert with my host sister

One thought on “Live in Concert”