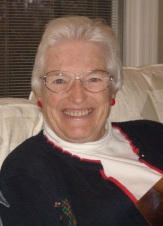 “This is Peggy Barbour Straughen and I am on my way back to Ohio from a family reunion and I thought I would report some of my childhood memories of my grandparents. As I am speaking of this, I am now 60 years old.  Let’s see…”

My grandmother grew up in south-central Pennsylvania, living for a time in Shippensburg but growing up mostly in Chambersburg. In 1997 she recorded a tape recounting memories from her childhood and transcribed it. These are some of Peggy’s memories in her own words.

Well, I never learned my sewing skills at home. My Mother had a sewing machine, but I don’t ever recall seeing her use it. It was our telephone stand in the downstairs hall. When I was a Freshman in High School, we had to take a semester of cooking and a semester of sewing. One of our sewing projects was to make a 6 or 8, I think an 8 gored skirt. That is a very flared skirt. Mine was just awful and eventually my Grandma Coleman took it apart and made an apron out of it. That same G’ma taught me to crochet
when I was just a youngster. I guess those things learned early stick with you because I’ve always been able to do that very well.

But after we were married, – the second year we were married, and the first year we lived in Pittsburgh, after Polly Mae was born, I had this beautiful little girl and we could not afford to buy new clothes for her. Bill’s Mother had been a sewer so kind of with Bill’s pushing and I guess I went along with it just fine, he bought me a sewing machine and I took dressmaking courses from Sears where we bought the machine. And that was my learning to sew! My Grandma Coleman had been a quilter and so was my Aunt Mary. They quilted with the Ladies Aid Society back at the church every week. So when I was pregnant with Heidi, we lived in Staten Island. We lived in an old Presbyterian manse that was very cold. My G’ma had died a couple years earlier and I had asked for her quilting frame so I did my first quilt that winter. It was a Tumbling Block pattern and I pieced it by hand and hand quilted it. I look at it now and it has all kinds of toe-catcher stitches in it. That was my first exposure to quilting.

As far as cooking goes, I guess I always had an interest in cooking. My Mother was not an extraordinary cook, but a good cook. She cooked what my Dad liked which was natural. The worst things she made were Jell-O salads with canned fruit cocktail in them and baked beans using big old hard butter beans. I did not like either of those. But she made wonderful Busy Day Cakes with a broiled coconut icing that I loved. So in Cooking in my freshman year of high school, I learned to make a few things, one of which was Eggs a la Goldenrod. I served that to Bill within the first month we were married, and we still laugh about that! It was like … asparagus or something laying on toast with a white sauce over it and then you grated hard boiled eggs over it and it was supposed to look like goldenrod. So Eggs a la Goldenrod was kind of an inside joke between Bill and I. At my class reunions, it seems that was a common thing! Then the summer between my Junior and Senior years, my Mother gave me the responsibility for cooking for the family. I guess that is when I really learned to cook and have enjoyed it ever since.