No obituary has been found for Edwin McKee so I have written my own:

Edwin McKee, of 105 Parkwood Drive, died 27 January 1925 at St. Elizabeth Hospital in Dayton, Ohio. He was born 13 Oct 1849 in Montgomery County, Ohio to John H. and Amelia (Ramby) McKee. Edwin married Anna Irwin on 11 April 1878 at the German Baptist Church in Madison Township. Although he had retired in recent years, Edwin worked for more than thirty years as a house painter in Dayton.

Edwin was preceded in death by his parents, a sister and several half-siblings. He is survived by his wife and two daughters, Lorena McKee of Dayton and Grace (Walter) Bell of Dayton, and a brother, John Henry McKee of Dayton.

Whitmer Bros. is responsible for the arrangements. Burial will take place at Woodland Cemetery on 30 January.

Edwin’s wife Anna had an obituary published in the Dayton Daily Journal on 31 Dec 1935, pg. 8, however I found it to be lacking in some essential details. I thought this would be a good opportunity to try something new and expand on her obituary. 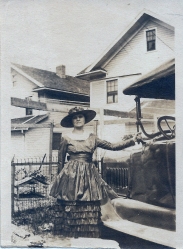 Mrs. Anna McKee, 78 years old, died last night at her residence, 116 West Parkwood drive, after an extended illness. She was born 22 May 1858 in Haldimand, Ontario, Canada to Stephen and Bridget (Rooney) Irwin. After moving to West Baltimore, northwest of Dayton, as a young child, she was a lifelong resident of Dayton. On 11 April 1878 Anna was joined in marriage with Edwin McKee, who died 27 Jan 1925.

Funeral services will be held at 2 o’clock Thursday afternoon from the residence. Burial will be made in Woodland cemetery. The body may be viewed at the Marker funeral home until 3 o’clock tomorrow afternoon.

She is survived by two daughters, Lorena McKee and Mrs. Grace (Walter H.) Bell and one granddaughter, Marilynn Ruth Bell, all of Dayton, and a brother, Felix Irwin, of Buffalo, N.Y. Mrs. McKee was predeceased by two sisters and four brothers. 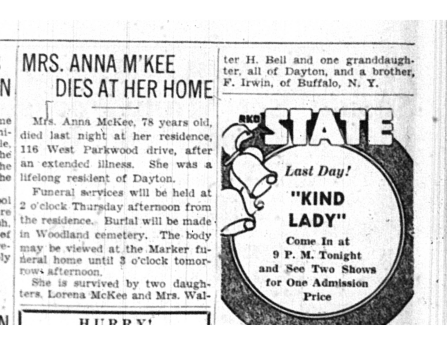