My grandfather, Bill Straughen, and his family lived in a small duplex 2 blocks from the Delaware river in Penns Grove, New Jersey. The Straughns were very poor but they lived next door to Wilbert S. Leap, who owned a haberdashery that occupied the front of the first floor of his home. Mr. Leap also happened to be the family’s landlord. “Mr. Leap was one of the richest and kindest men in town.” My grandfather told me that it was Mr. Leap who paid for him to go to college, which eventually allowed him to go to medical school and become a doctor.

This man intrigued me and I have become interested in researching the Leap family as part of my genealogy when I started to notice that the two families had been neighbors for many generations. I have always wondered if eventually I might find a family connection between the Leaps and the Straughens. Even if I never do, I am glad to be able to preserve the legacy of my grandfather’s mentor and benefactor.

Wilbert’s grandfather, initially a blacksmith, had opened a haberdashery on Main Street in 1840 and passed on the business to two of his four sons when he died in 1859. They moved the business across the street into the building that continued to be Wilbert’s home until he died. Wilbert’s father, David Leap, was one of the partners and passed the business to his son. The other partner was S.R. Leap, who was at one time postmaster of Penns Grove and operated the post office from the store.

Wilbert took over the business in 1910 and operated it until the late 1960s. He was in his 60s when my grandfather was a child. My grandfather recalled him being a most generous neighbor, even when the haberdashery business began to decline. Despite the hard times, he only charged the Straughns $25 a month in rent for over 40 years. He made loans to people that could surely never pay him back. In one case, Mr. Leap paid medical bills for an injured child whose family couldn’t cover them.

In 1973 Wilbert S. Leap celebrated his 100th birthday, which was commemorated with an article in the local paper. Mr. Leap passed away in 1975, the day after his 102nd birthday. He was buried in Riverview Cemetery in Penns Grove.

The house where Mr. Leap resided for his entire life is still standing. When I visited Penns Grove in March 2017, I spent a lot of time looking around the property. Although it must have once been beautiful, it is now in a state of crumbling decay. The duplex my grandfather grew up in was torn down between 2012 and 2014. I’ll be sad to hear when his neighbor’s home is also razed. 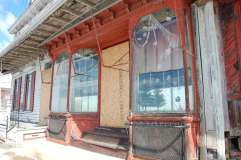 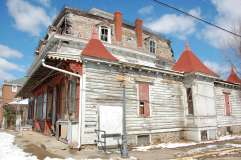 2 thoughts on “The Man Next Door”