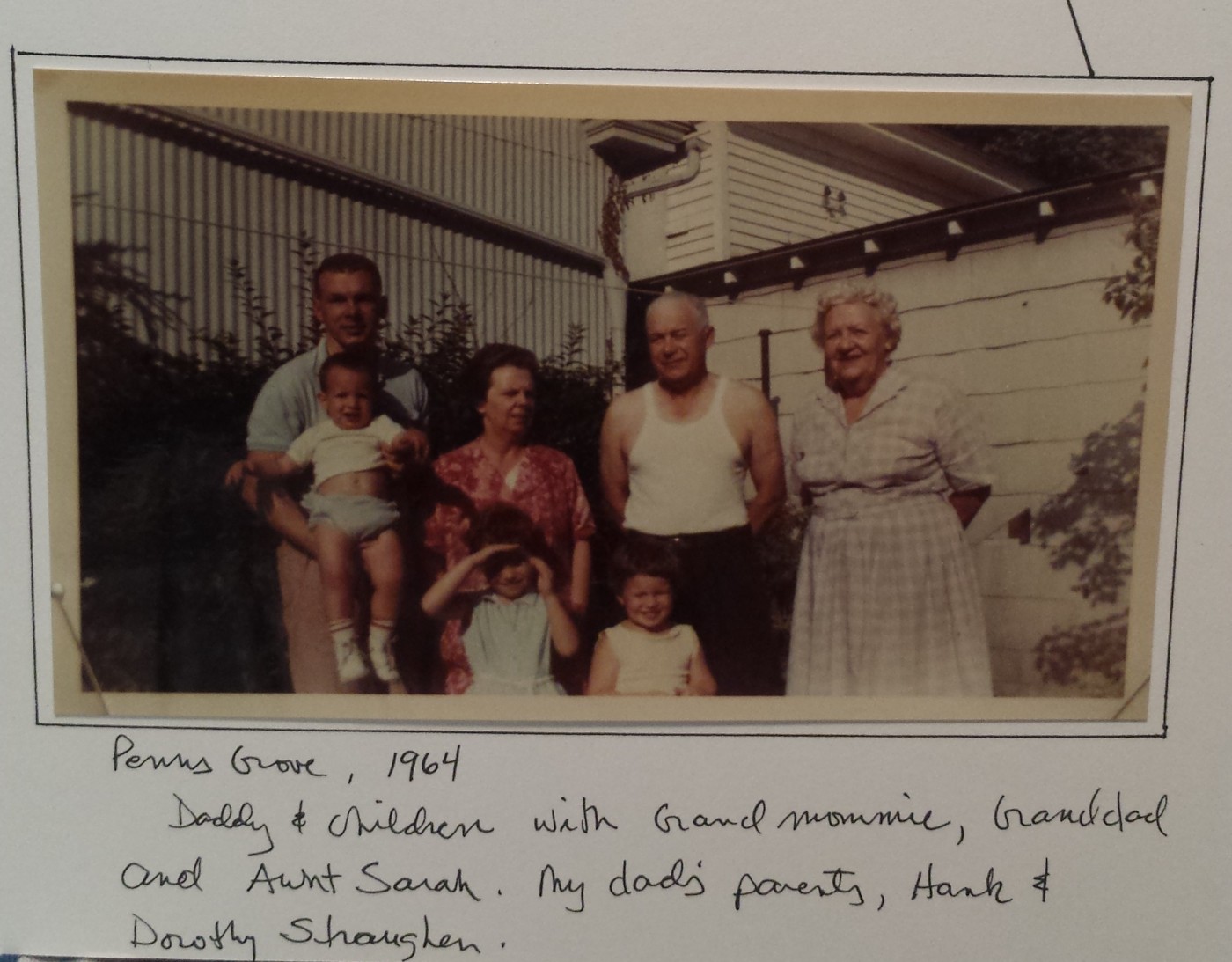 I always have fun playing along with Saturday Night Genealogy Fun from Genea-Musings! You can check out his prompts on his blog and join in on the fun!

The prompt for April 25: http://www.geneamusings.com/2015/04/saturday-night-genealogy-fun-favorite.html

This week’s prompt is to select a favorite family photograph and share it. Below I have selected a photo of my mom’s family. It’s a little dark, sorry!

The caption below the photo is my mother’s writing. This came from an album she made when she was into scrapbooking using scans of old photos. She does not know where the originals are right now. The caption says “Penns Grove, 1964. Daddy & Children with Grandmommie, Grandad and Aunt Sarah. My dad’s parents, Hank & Dorothy Straughen.”

I picked this picture because I think it’s the only photo I have of Aunt Sarah, who I know little about, except the legend. I’ll get to that in a bit.

Setting: This would have been at my great-grandparents’ house in Penns Grove, New Jersey.

I feel like there is a lot I don’t know about “Aunt Sarah” as she is referred to. I know she had two husbands and moved all over the place, but even my grandmother’s information on her in the family tree she left behind is minimal. There is a family legend about finding “Aunt Sarah’s Ring” which was supposedly lost in my grandparents’ house at some point. When we were cleaning out their house this summer to prepare it for sale there is speculation that a ring we found is indeed the lost ring of Aunt Sarah. Without my grandparents to confirm it, I guess we will never know!

**My grandfather deliberately changed the spelling of his last name from “Straughn” to “Straughen” when he reached adulthood because he believed it made it easier to spell. In reality it just made record keeping a genealogist’s worse nightmare. He never changed it legally, he just started writing it that way. I have recently discovered though that only a few generations before my grandfather the “e” was indeed used as well. So the “correct” spelling is debatable. Not only is the last name a challenge but my 1st & 2nd great grandfathers were both named Franklin James Straughn and routinely swapped the first and middle name to distinguish themselves. I spent about 6 months with all my old photos attached to the wrong people before I realized the dates made no sense with their clothing!